Solway Tours have been guiding guests on bespoke historic and ancestral tours of Scotland since February 2015 and is the only Visit Scotland rated five star tour company in the South of Scotland.

Mark Turner and Lesley Watson are both former history teachers in Dumfries and Galloway. Both have strong links with the local area and through their time in education were at the forefront of promoting and leading the outdoor classroom through educational trips to the World War One battlefields, USA, Malawi, China and a large number of historical experiences throughout the United Kingdom. Both are passionate about celebrating Scotland’s history with others and are proud to be offering five star guided history tours.

Mark was brought up in Garlieston, a small fishing village in the west of the Region, before moving to Glasgow to study History and Politics in 1986. He taught in secondary schools in Scotland for over 23 years beginning in Easterhouse in Glasgow before returning home to teach In Dumfries and Galloway in 1997. Mark was promoted to the level of Headteacher and was proud to serve local school communities in Lockerbie, Thornhill and most recently as leader of the innovative Dumfries High School community.

Mark is passionate about all historical time periods but has particular interests in the Stone Age era, Medieval Scotland and World War 1. He is also extremely interested in politics at local, national and International levels. Mark is keen on most sports and has a family with three children who are all still at school in Dumfries.

Lesley was born and raised in Dumfries attending a local primary and secondary school before heading off to Stirling University to study History, Religious Studies and Education. After completing her degree she quickly moved back to the region taking up a history post in Langholm in the East of Dumfries and Galloway. After four years teaching there she moved to the high achieving Wallace Hall Academy in Thornhill where she took up the promoted post of Pupil Support and most recently as Depute Head Teacher.

Like Mark, Lesley has a great passion for all historical time periods but has particular interests in World War 1, Modern European History and the Scottish Wars of Independence. Lesley is also interested in music, theatre and spending time with her friends and family. 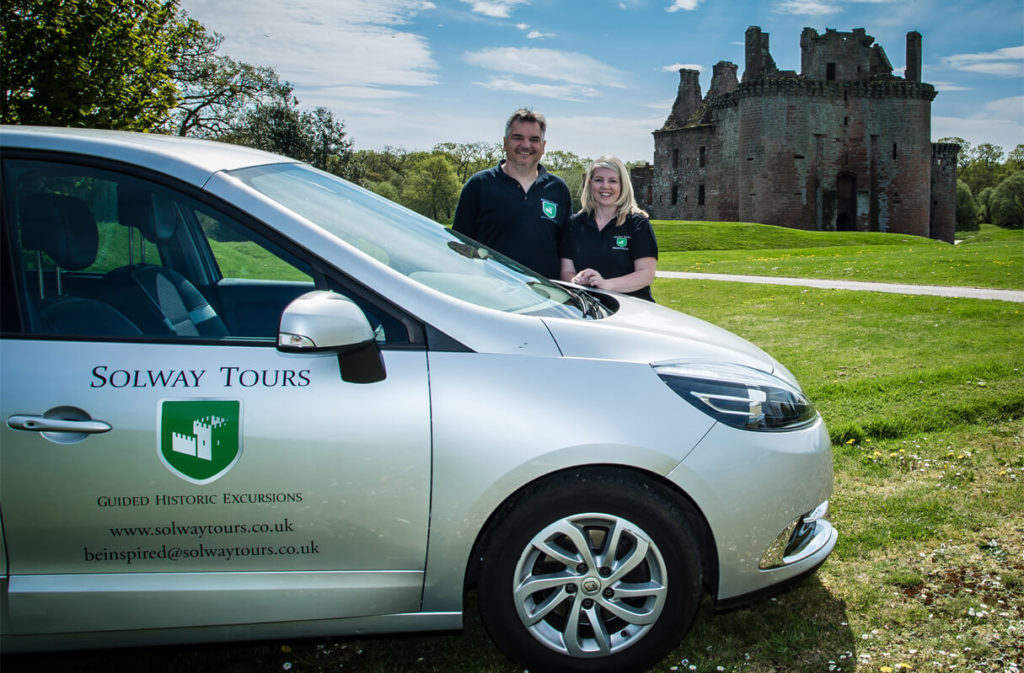 Our vehicle is a seven seat, six speed, manual, 2014 Renault Grand Scenic The 2014 car is environmentally approved and has extremely low carbon emissions. This car has the eco2 signature to identify it is one of Renault’s most efficient and economical vehicles.