As Scottish families go, the Clan Douglas can stake their claim to being amongst the most powerful to have ever existed. Shaping the history of the nation time and time again throughout the Medieval period and beyond. They have provided inspiration for writers and have left a powerful legacy. One of the best ways to begin getting an impression of the Doulgas families illustrious history is to visit one of the many sites across Scotland that can boast to have been owned or associated with the Douglases. Here we plan to take a look at some of the best preserved and most interesting sites to visit in the South of Scotland associated with the famous Clan.

Parting ways; a split in the family

The Black Douglases and the Red Douglases were two distinct lines of the Clan. The death of James, 2nd Earl of Douglas at the Battle of Otterburn in 1388, in which he played a pivotal role in gaining a decisive Scottish victory, led to a split within the Douglas clan. Without “Issue” (A direct successor) the illegitimate son of his great-uncle, Sir James Douglas (often referred to as “The Good” Sir James or simply “The Black Douglas” depending upon which side of the border you found yourself)  gained the title of 3rd Earl of Douglas. This illegitimate son has become known to history as “Archibald the Grim”.  With the 2nd Earl of Douglas leaving no direct successor, “Archibald the Grim” became the 3rd Earl of Douglas. From this point on his descendants became known as “The Black Douglases”.  George Douglas, another illegitimate child, this time of William, 1st Earl of Douglas and Margaret Stewart, 4th Countess of Angus and Mar gained the title of 1st Earl of Angus via his mother. George Douglas, 1st Earl of Angus and his descendants gained the moniker of being the “Red Douglases”. 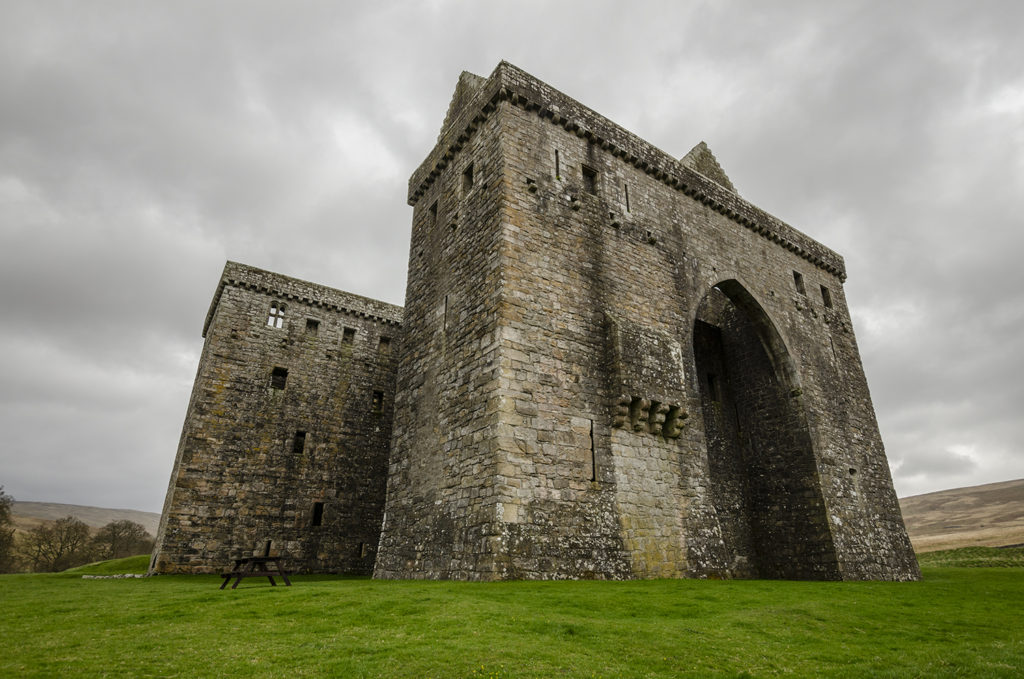 The Douglas connection to Hermitage Castle starts in the late 1360’s when the family secured possession of the site. Prior to the Douglases appearing on the scene at Hermitage there stood a building quite far removed from what we see today. Rather than the megalith of stone that stands in the valley of the River Liddel, owing to the area’s name liddesdale, there stood a stone residence built by Sir Hugh de Dacre. William, 1st Earl of Douglas had gained the lordship of Liddesdale by the late 1360’s and began with earnest to build the magnificent, foreboding castle we see today. The lands around Hermitage continued to be hotly contested throughout the medieval period as an excellent strategic border crossing point. The castle stands within the Liddel Valley which for hundreds of years acted as a strategic point at the Scottish/English border where forays and attacks into either country could be carried out. This gave the castle a vital importance during this tumultuous period in Scottish history. The castle was built up successively to incorporate various towers with the footprint of the castle getting gradually larger and its appearance ever more imposing. The castle became the property of the “Red Douglases” when the family split in two in the late 14th century. The Douglas association with Hermitage was maintained until the late 15th century when Archibald, the 5th Earl of Angus was found to be conspiring with the English. Because of Hermitage Castle’s importance at the doorway to the south of Scotland, Archibald known as “bell the cat” was forced to exchange Hermitage for Bothwell castle with the Hepburn family who, in the eyes of the monarch were more trustworthy custodians of the vital border outpost.

St Brides Church is an important site in the history of the Douglas Clan. It is thought there has been a church on the site since around the 1100’s however most of the “current” church actually dates from around the 1300’s. Archibald, 3rd Earl of Douglas built the current church to house the tomb of his father James Douglas, Lord of Douglas, the famed “Black Douglas”. His father’s tomb still sits within the church alongside later members of the Douglas Clan. 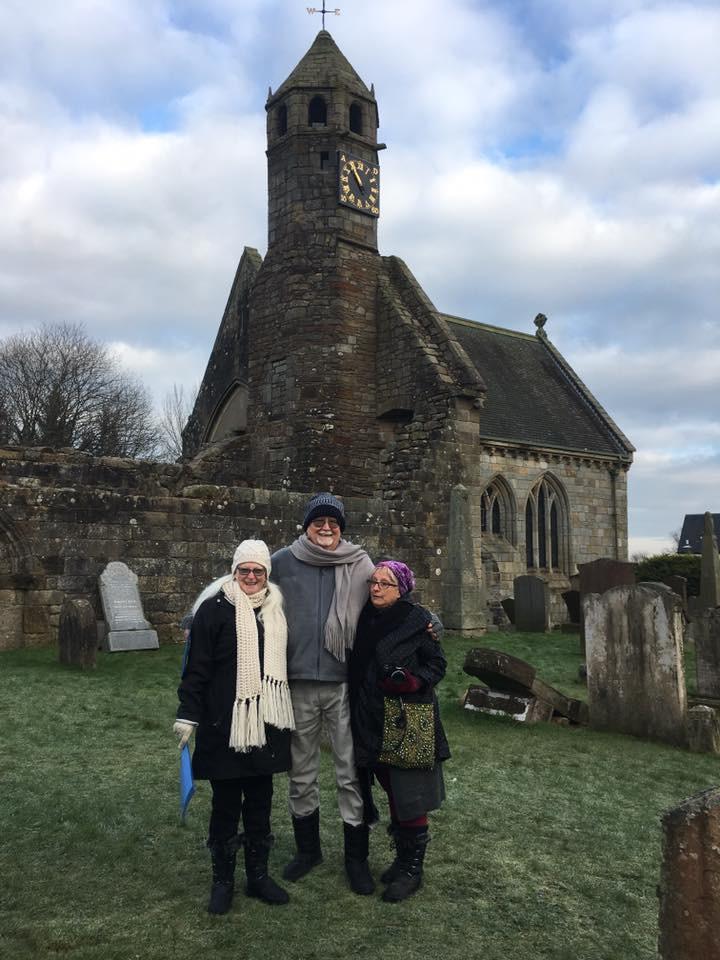 Much like St.Brides Church, Threave was the work of Archibald “the grim”, 3rd Earl of Douglas. Having gained the title of Lord of Galloway in September 1369, work on Threave Castle began. Archibald’s title of Lord of Galloway combined with his position of Warden of the West march, the Stewart royal’s representative in the South-west made him a powerful magnate. His power only continued to increase with his acquisition of the Earldom of Wigtownshire and his accession to being the 3rd Earl of Douglas in 1388. The powerful 3rd Earl died at Threave on Christmas Eve 1400. Threave’s association with the Douglases lasted for some 55 more years until 1455. 1455 Marked the year when King James II laid siege to several of the “Black Douglases” Castles including Threave. The years prior to the siege saw bloodshed and the eventual downfall of the “Black Douglas’s”. In 1452, William, the 8th Earl of Douglas was murdered at Stirling Castle and thrown out of a window or defenestrated (An intriguing name for the act of throwing someone from a window!). 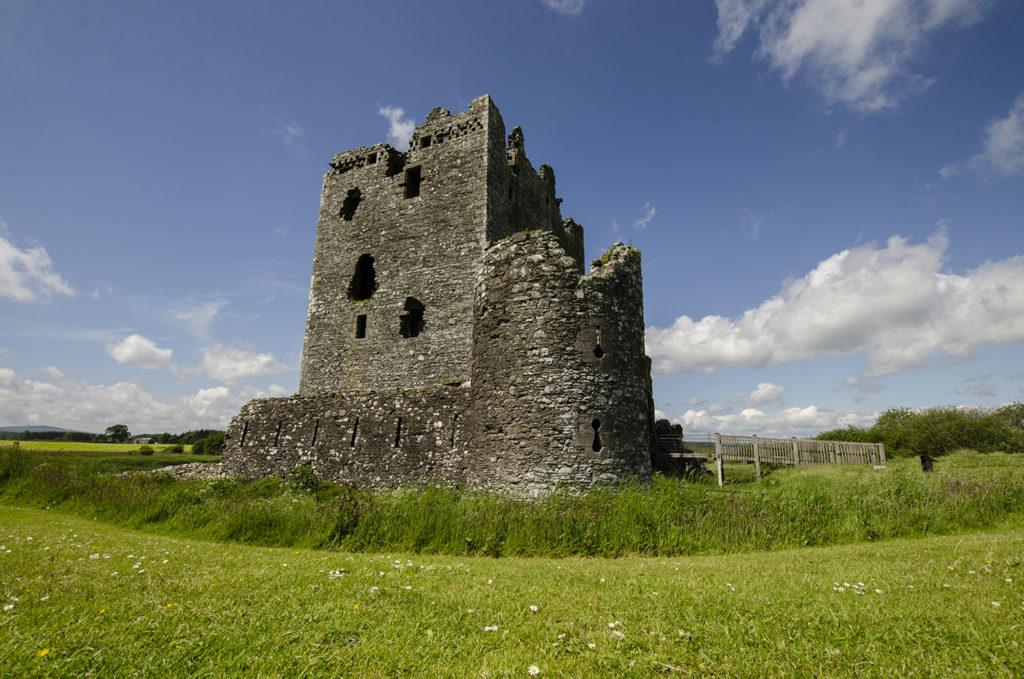 When the 9th Earl of Douglas gained the title the relationship between crown and the clan stabilised for a very brief period before descending into war between the crown and the “Black Douglases”. The final major battle fought by the Black Douglases came at the Battle of Arkinholm near Langholm in the Spring of 1455. The result was a decisive royal victory for James II. Interestingly during this Battle, the leader of the opposing royal force was also a Douglas, in this case a Red Douglas in the form of George Douglas, 4th Earl of Angus. Who needs friends when you have family like that! After the battle Threave became the last redoubt in this campaign and after a long siege during the summer of 1455 was eventually taken by James II’s forces. Due to Threave’s excellent defensive nature more subtle means were needed to take the castle and bribery of the garrison was the answer to the lengthy siege. Threave Castle was the final Castle of the Black Douglas’s to fall and the 9th Earl’s title and lands were forfeit and attained by the crown. The line of the Black Douglas’s in Scotland faded and their influence all but vanished.

Tantallon Castle can be classed as one of the great scottish castles. Built in the mid-1300’s by William, 1st Earl of Douglas. It’s large imposing red sandstone walls look out onto the Firth of Forth and the famed Island of the Bass Rock, infamous for its former use as a inescapable prison. The castle became the stronghold of the “Red” Douglases after being passed onto this line of the family in the 1380’s. Tantallon remained a stronghold for the Douglas clan for some 300 years withstanding sieges from a varied array of armies. This included armies of the crown and Oliver Cromwell during his invasion of Scotland in the mid-seventeenth century. During this time the Douglas stronghold housed a small royalist force, Cromwell’s forces sieged the castle with several thousand men and artillery. The siege of 1651 caused extensive damage to the castle after which the castle was ruin and went out of use. In 1699 Tantallon’s association with the Douglas Clan ended with the castle being sold off to Sir Hew Dalrymple. Tantallon was given over to state care in 1924 and is now in the care of Historic Environment Scotland. 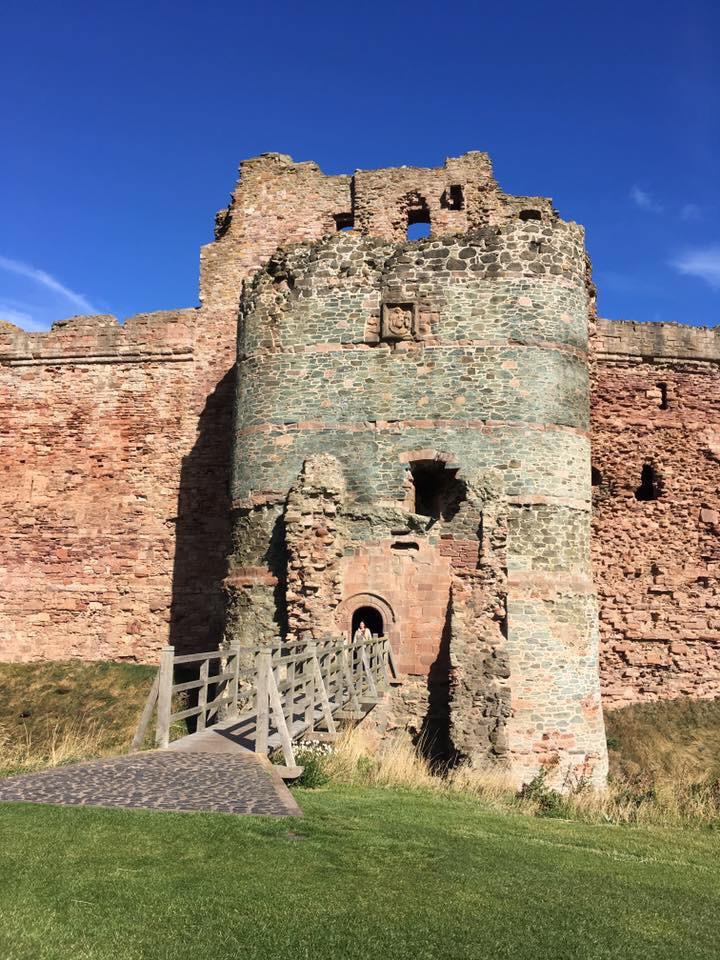 Built in the 13th century by the Murray family, the castle has an extensive history prior to its association with the Douglas clan. Whilst in the possession of the Murray’s the castle withstood a great siege by English forces of Edward I in 1301. The original design for the castle was huge covering a piece of land double the size of the current ruins. Original plans however were not fully realised. In 1362, a certain, Archibald “the grim”, 3rd Earl of Douglas (See Threave!) married Joanna Moray (Sometimes De Moravia or de Moray). As heiress to the large Moray estates these came into the possession of the Douglas’s. The 3rd and 4th Earl spent much time and effort improving the castle including the addition of a large rectangular tower known as “Archibald’s Tower”, one of the first of its type in Scotland. Unfortunately only the footprint remains of this impressive structure. His son, also (somewhat confusingly!) Archibald Douglas became 4th Earl of Douglas and continued his fathers improvements of the castle. The downfall of the Black Douglas line in 1455 (See Threave!) led to Bothwell becoming a crown possession. Through exchanges of land and property in the late 15th century the castle once again came back into the possession of the Douglas clan. This time in the form of the Red Douglas line of the family. The castle played host to visits from King’s during this period with both James IV and James V visiting the castle during their respective reigns. The castle remained in the possession of the Douglas Clan however by the late 17th, early 18th century the castle was but a ruin. The once great castle remained unoccupied and eventually came into state guardianship in 1935.

The stunning Drumlanrig Castle is unique within this list of Douglas associated sites, in that it still has strong connections to the family to this day. The incumbents of Drumlanrig, the Montagau Douglas Scott’s can draw lineage not only from the Douglas clan but also from the Montagau’s and Scott’s respectively.  The current Castle was built from local red sandstone in the late 17th century for the 1st Duke of Queensberry, William Douglas. The grand renaissance castle stands on the site of an earlier castle built by the Douglas family and probably dates to around the 14th or 15th century. The castle and its grounds now stand as a beautiful attraction for visitors, inside is housed a nationally important collection of art, assembled and inherited from not only the Douglas’s but also the Montagau’s and Scott’s with paintings by Thomas Gainsborough and Sir Joshua Reynolds’s to name but two. Drumlanrig is a fantastic castle to visit in order to appreciate how the Douglas clan has evolved and found it’s way into the 21st century. 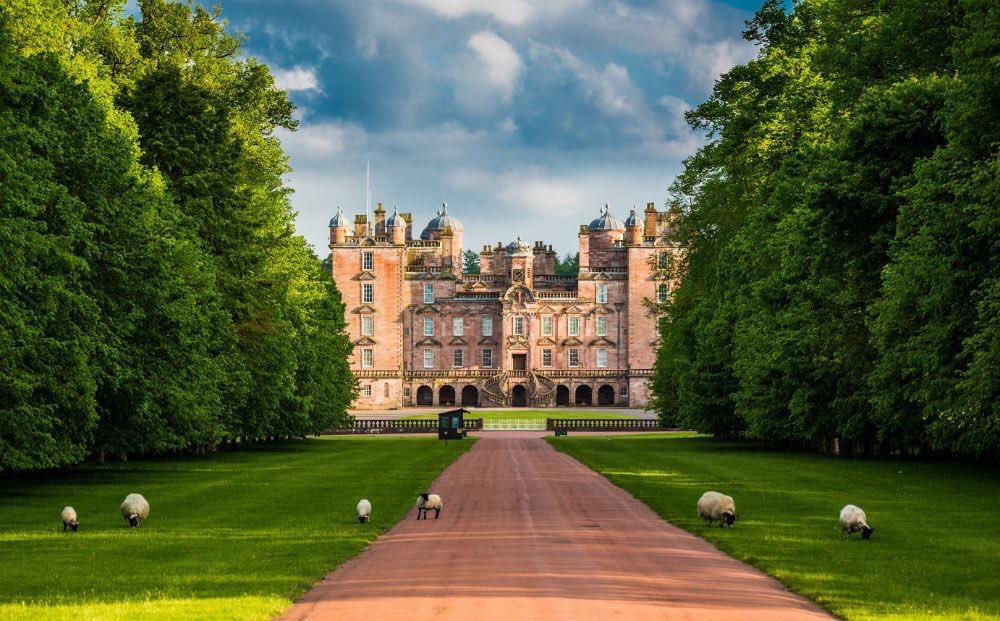 Alongside the sites mentioned in this blog the clan Douglas held a number of other sites, if you’re a Douglas and would like to explore these sites and others associated with your ancestors why not get in touch to find out about our specialised ancestral tours.  https://www.solwaytours.co.uk/ancestral-tours/ 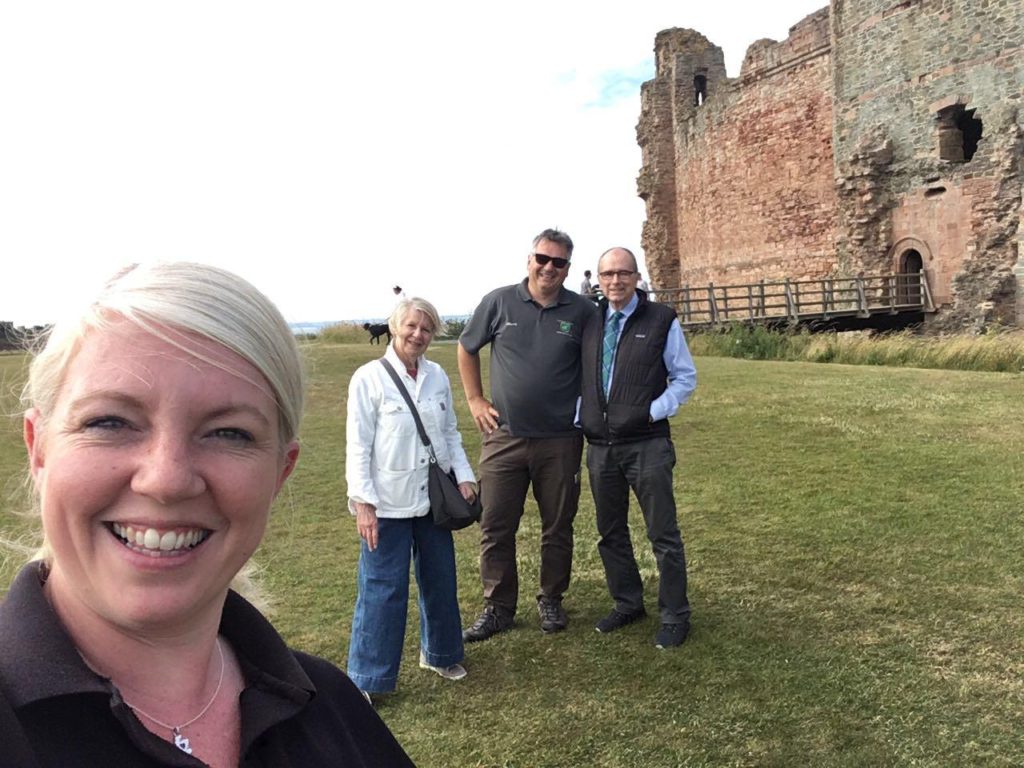 Not a Douglas? No problem! We are proud to offer bespoke ancestral tours for a range of different Clans including Johnstone, Armstrong, Maxwell, Maclellan and many more